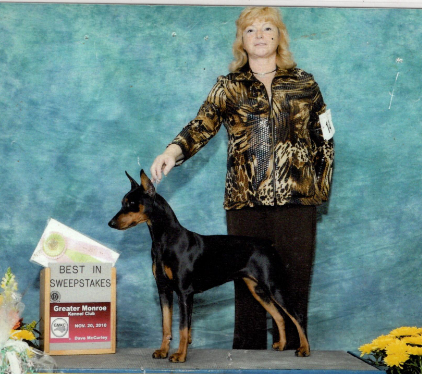 History of the German Pinscher
The Wire Haired and Smooth Haired Pinschers, as the Standard Schnauzer and German Pinscher were originally called, were shown in dog books as early as 1884. However, drawings of the German Pinscher date back to at least 1780, and the breed likely traces its roots to varieties of ratters well established on farms in Germany as far back as the 15th century. These medium-sized dogs descended from early European herding and guardian breeds.

The source of the German Pinscher can be traced back to 1836 when this breed surpassed the Mops in popularity. Pinschers were used as guardians for coaches. They also lived in homesteads where they were used to kill vermin, a job they did by instinct. Even today you can observe German Pinschers searching for and finding rats in open areas and in homes.

The Standard Schnauzer (then referred to as the Wire Haired Pinscher) was originally born in the same litter as the German Pincher. Over time, breeders decided to separate the “varieties,” changing them to actual “breeds.” After three generations of the same coat were born, the Pinscher-Schnauzer club allowed them to be registered as their own breed.

From 1950 to 1958, no litter had been registered. Credit is attributed to Werner Jung for collecting several of the breed in 1958 to continue the German Pinscher as we know the breed today.
The German Pinscher came to breeders in the United States in the early 1980s, though accounts of single German Pinschers appearing in the country before then have been noted.

WHAT TO EXPECT from your German Pinscher

A well bred German Pinscher will be a loving companion with an even temperament. German Pinschers are generally friendly dogs. They are highly intelligent, quick learners who do not enjoy repetition in training. 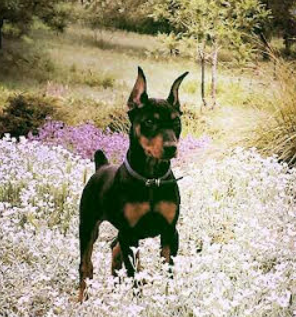 German Pinschers are terrific ratters, watch dogs and loyal companions. Grooming is minimal. They are intelligent, energetic working dogs, in many cases requiring several hours of exercise a day. They love to play and excel as performance and agility dogs – thus a large, securely fenced yard is highly recommended for anyone considering the breed as a pet.

Their constant movement will entertain you!

Our German Pinscher puppies will be posted for sale on the AKC Marketplace Find a Puppy webpage (https://marketplace.akc.org/puppies).

These adorable, healthy babies from our champion show stock will be ready to fill your life with energetic fun and companionship. – Reserve yours right now.

Is a German Pinscher the right dog for me?